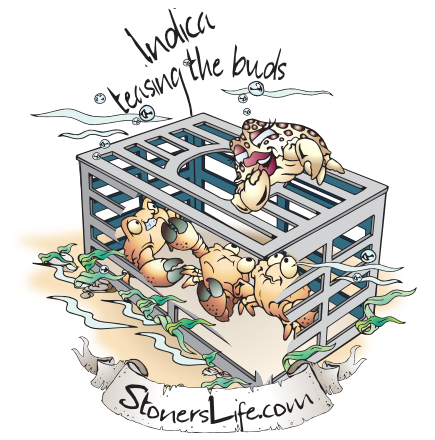 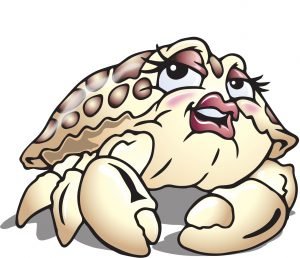 Indica is small and a little broad and loves to just chillax with the buds. She is docile, playful, seductive with a savory, sultry personality. Indica loves long walks on the beach, sunsets or just lying in the sand. She is looking for a long-term relationship (LTR) with Stoner and the Buds. She loves to tease the buds. The buds will play along until they get hungry. Indica is usually the first to be eaten in a trap that has not been worked in a while.

The scientific name, Hepatus Epheliticus, it is also known by several other names including Gulf Calico Crab, and Dolly Varner Crab.

These crabs have a range from the Chesapeake Bay to the West Indies but are most abundant in shallow coastal waters in the Gulf of Mexico.

The Leopard crab is relatively small, measuring only about 2 to 4 inches wide, its size may be what keeps it off a menu. While off of our menu they small tidbits for larger animals, they are a favorite meal of the sea turtle, rays and fish.

The Leopard crab is docile and attractive with its red and white spotted shell. Because they are small and not as aggressive as most crabs they are scavengers and have the name of the garbage disposal for eating organic matter like rotting plants and decaying animals.